An evening at the Wisteria Tea House (Taipei) 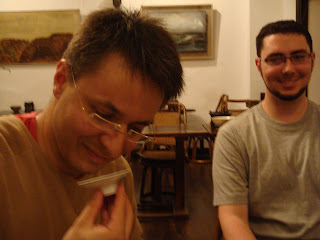 I have been playing with the idea of writing a blog for a while now. For many reasons that I should not mention now, this idea was always delayed. So "enough is enough" This is as you can see my first and hopefully not last posting.
Allow me to introduce: The guy on the left smelling the cover of the Gaiwan/Gaibei is Stephane ("the king of tea blog" http://teamasters.blogspot.com/). The guy on the right who looked bemused at this is Jason ("The Prince of Pu-erh" and creator of the pu-erh community http://community.livejournal.com/puerh_tea/).
Not appearing on this picture but also present are Adam Teatime and his friend.
Stephane and Jason insisted that I take a picture of them without their glasses - so I did. 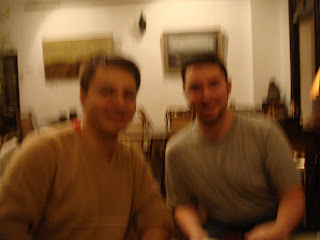 A word on The Wisteria Tea house. The place was damaged by a typhoon in 1961. The front was refurbished into a western style edifice. The history of the place is full of political gatherings and the renaissance of the tea culture in Taiwan.
Talking about tea and politics, in some later postings I will describe some "Tea masters politics", the hate and love between the different tea masters I came across is absurd.
For example, after my first visit to the Wisteria Tea House some 2 weeks ago, I brought with me 2 servings of Lapsang Souchong, one for one of my tea masters the other for Stephane to try some bad lapsang (not because I dont like them, but in the name of education) since we had the good fortune of trying a top notch lapsang souchong some 3 weeks ago.
My tea master declined to try it - not because it was even visually obviously of low quality, but because he has some "unfinished business" with the owner of the Wisteria tea house - principles. 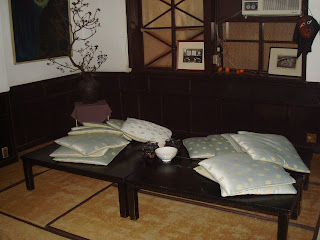 Well, I don't have any grudge with the owner and the staf there have always been nice - even when they kicked us out at 23.30... .
The place is beautifully simple and traditionally decorated. If you are in the possession of some good tea your self I suggest to go there, order the cheapest thing from the menu, save it for home and prepare your tea in this great atmosphare.
If you are intrested to read what we had that evening I suggest you go to Stephane's blog.
Cheers. 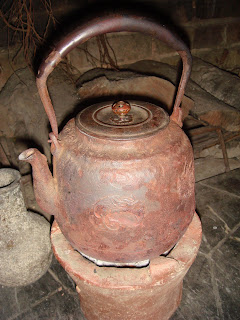 Let me be the first to discover your blog and leaves a comment! Welcome to the blog world and you can count on me to come here often.

Very interesting! I'm a fan of well written and well illustrated journals like this one :)

Hope to exchange some samples with you in the near future.

Will keep in touch.