Ido:"Hey Stephane how are you?"

Ido:(thinking to myself - 'wow I dreamt it was Friday' - a quick look at the watch confirms my nightmare - Stephane has gone crazy - it is Friday) "hmm Stephane what are you talking about its Friday".

Little did I know this would turn up to be a "Happy Friday".

A bit later on I meet up with Stephane. 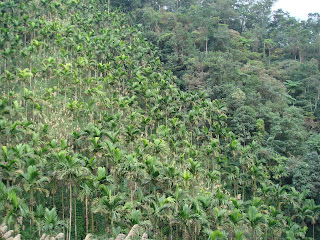 The view as we climb up the mountains is breath taking. The whole area is full of little tea farms and bamboo trees as well as other vegetation.

Stephane brought the whole gear with him, beautiful cups, a great tea pot (if you don't have one by now get it!), his by now world famous dragon tetsubin and of course 3x 5 litters empty water bottles.

We made a quick stop in the mountains to fill the water bottles with natural "Wenshan' water - yammi! At first I was suspicious, Stephane too. While I was in Hong Kong last week apparently it rained here a bit. Furthermore, the farmers might have used some pesticides - hint: the best time to "bottle at source" is usually at summer and obviously when and where there is no pesticides used. 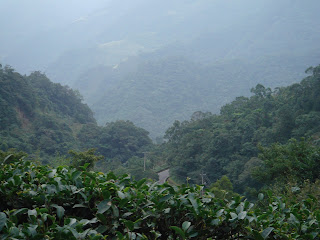 We than continued climbing up the mountain, frequently checking for the "best view" to sit down and enjoy our tea.


Stephane saw it first (Half of the time we drove I was sitting with my eyes closed praying to get home safe - Stephane is a Taiwanese driver with a French attitude). An 'island', surrounded by clouds, tea farms, vegetation, bamboo trees, plum trees, silence and a monastery! 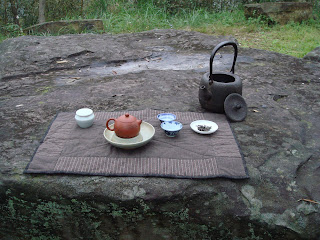 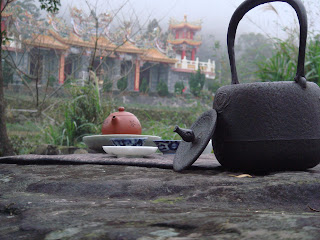 Similar to Stonehenge in England, and as if my magic, there was a huge flat stone and smaller stones spread around it - yes we had a marvelous natural "table" and enough "sits" to sit at least 10 people.

Furthermore, I bet that Stephane's mother had this moment in her mind when she prepared this beautiful "tea cloth" we used.

So we started to prepare everything. 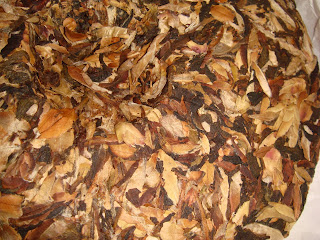 Such an occasion cry out for a special tea. So I took out my most prized tea so far, its obviously a "king"puerh cake (2006), which in my language means its made mainly of the buds and highest leaves. Moreover, this is from old wild trees (around 100 years). We used approx 3 grams.

The open-air location, as well as the small amount of leaves did not enable us to smell the dry leaves (it was not problem once the leaves were wet). I have strong suspicion that when the novel "Perfume: The Story of a Murderer" was written a cake similar to this was in near proximity.

The smell of the cake actually tastes like the tea, which is always a good sign - assuming the tea smells good that is :-)

Already from the first brew it was very, very sweet! by far the sweetest puerh I drunk and possibly the sweetest tea I had! One could taste a forest, and many layers of fruitiness - wild - "duh".

We brewed the tea for various lengths of time, this tea can easily take a 3 days brew (see future "tea testing" post) - I did it. 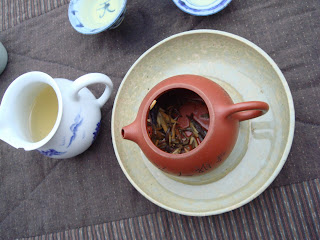 The first 4 times were extremely sweet. Then I guess my tongue got a bit numb, so it felt like the strength started to wear off. But after some moments of waiting time, when sipped again, I was reminded at how fruity and sweet this cake really is!

After such intense sweetness as the tea touched the taste buds (and even before when you smell it) it is almost no wonder that there was very little after taste, at least that is what I think.

Anyways, it soon started to rain a few drops so we decided to move into the monastery. After a brew or two, disturbed by the strong smell of the incense we moved again this time to the outside - side entrance of the monastery. A few brews later and we sat on top of the "ghosts barrier" of the monastery. By now the few people who were in the monastery left.

Except for one monk. The monk said a few words to us, and laughed a lot. I believe his laughing was due to a strong self-realisation that this scenario could have been a beginning of a good joke, "A French, an Israeli and a monk ... ".

Anyways, just wanted to say thank you for this "Happy Thursday".

P.s. There is hardly any good "oriental beauty" anymore. "Wenshan" is just a short distance from Taipei. This greatly affects the teas produced there. If anyone want to have any oriental beauty worth its name, do what you can to save the environment.

Note: If you wish to see the wet leafs I guess you can click on the "Tea masters" link. Stephane took the leafs for a few more brews and a postmortem back at home.

I'm still having it right now (Sunday afternoon). It's excellent! So, it may take some more time until I can show the leaves on my blog.

Toda rabba haver sheli! This is one of the best teas on earth.

I am glad you like it!!!
I had an amazing time - thank you!
Regards to the family

Another Israeli tea lover is reading your blog. Can't wait for your second post.

Hope we can meet up some time towards the end of March when I come back.

Congratulations on the new blog... We should oragnize some tea tasting when you are back - be in touch..