The Last Day in Beijing

Having just come back from China, and after seeing a tiny bit of Beijing and almost nothing of northern China/Mongolia I can now say I have really experienced China -
I got food poisoning :-(
(yes, one can get it everywhere but everybody warned me of this before I went there)

China, for vegetarians, if you don't speak the language and don't know where to go exactly can be like a slaughter house.
We all heard about Mongolian horses, but have you ever seen a Mongolian donkey? 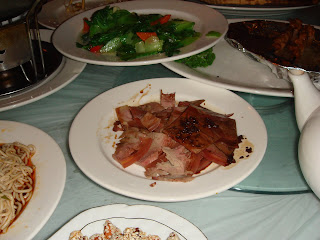 Back in Beijing I came across this sweet turtle. 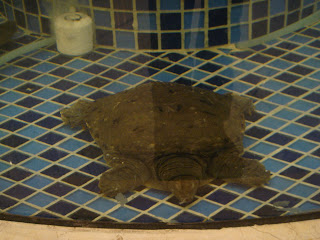 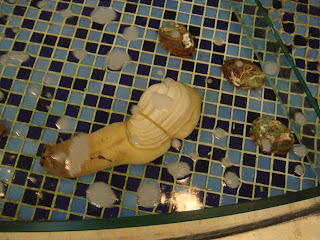 (No its not cream)


I will save you from the dish pictures. 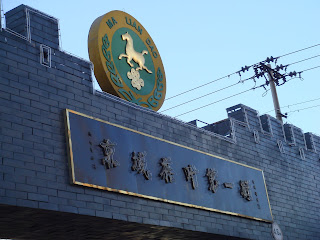 The majority of the stay in Beijing we stayed (I joined a Taiwanese guided tour) at the Da Fang Hotel. On the last day of the trip I wanted to skip the planned trip and do my own thing i.e. go to Mailan dao which I read so much about on online blogs.

To edit an embarrassing story, the hotel we were staying "Da Fang" is the very beginning of the street (if I only dared to look or ask earlier). Literally a 2 minutes walk and the mammoth of a tea street (city?, metropolitan?!) begins.

I don't know how to describe it actually. I have never seen anything like this for anything - never mind tea. Yes, there is a ceramic street, jade street, food street, clothing.... but this is not a street actually, its a city.

There is not much I can say about this place since I only been there for like 10 hours, must have passed by no less then 200 shops, entered some 30 shops, tasted 1-3 teas at around 25 of them and bought only one tea, and to be honest I was still at the beginning of the street, have not entered any tea-shopping malls...and to think they call something else the "forbidden city".

I am not sure how long one needs to hang around there to actually be able to say they have been to Malian dao, but its at least for 2 months.

Since it became obviously clear that I won't achieve much there this trip I had to device a sophisticated efficient, evil, cunning plan.

So upon entering the place, I asked to see the most expensive young raw puerh they had (young puerh is cheaper usually and if its good now it would be great when aged properly. Having said that, this is NOT always the case. I have a puerh cake that according to one expert is best drunk now, and it is excellent now).

Surprisingly many have a very limited variety of raw puerh if any! The reason, I suspect, this was not so cunning is that most people look for older cakes (regardless if good or bad?) so nobody bothers with younger stuff so much. Or, are they telling everyone that the young stuff is old (some cakes certainly tasted like that), and suddenly to say it is young would be short of a miracle?

So the next question was "the most expensive cooked puerh , please" (price can always be negotiated later).
I will tell about the interesting things I came across with this silly question at a later post.
And no, the plan is not cunning or sophisticated or any good for that matter but the place overwhelmed me completely I did not think much that day.

The third question must have sounded to them like "Me taste want Da Hong Pao best".

Da Hong Pao
At almost all places I visted that day, their best Da Hong Pao was sealed and stamped and no tasting was available so I had to compromise for their second best.

Except for one place, every where I tasted Da Hong Pao, it was, so I believe, faked i.e. usually Narcisis - not sure how to spell it(!). Some had interesting mixes of leafs actually even Phoenix leafs were to be found there.

But the saddest thing to me is that back in Taipei I saw similar things being actually prepared by various shop keepers!

In fact it gets sadder, many of them told me that if I don't mix, I can never become a tea trader. Its a good thing my dream is actually to own a tea house (I know- still selling tea). In case you were wondering this is a similar story in olive oil, only that there its probably gets dirtier and it even gets the government's approval if you are an excellent thief. The full meaning of this I wish to tell in yet another post.
MixShmix 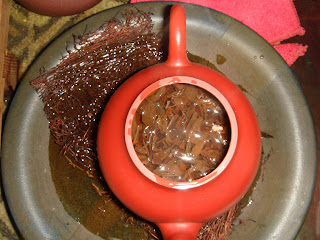 Let me just outline that with current technology the leafs will all look the same!

TRY YOUR OWN MIXES, you will be surprised! On - yet again - different post, I will talk about my experiences with GOOD mixes. Incidentally, there are many good mixes - but the fact that it is a mix should always be clearly stated otherwise as far as I am concerned it is theft!

On yet another side note, mixes in olive oil, and I don't mean it in the bad sense of the word i.e. soybean oil with olive oil, or different acidity levels of olive oil etc. are considered as art!

To be a good olive oil mixer/blender you really need to understand the various characteristics of the olive oils, the best time to mix, the ratio levels etc. This is usually done by expert and is very similar in its art to the work whiskey blenders do.

*I am sorry for this not-so-clear picture as I don't really know where I placed some clearer pictures of mixes.