I consider my self a frequent flyer (having just looked at my inbox it is obvious the airlines consider me to be one too). I have had some horrible flights which included some huge air pockets and turbulence, as well being struck by light at lift off.

Anyways, the flight home this time was the worst I could remember in my recent flight history. Ironically, the silence that came after each turbulence "session" (each "session" lasted something between 20-30 minutes and we had 6 of them with about 2-4 minutes of silence in between - sounds like a crash course to me...) was horrifying.


I arrived home at around mid-night, exhausted after a horrible flight and some 30 hours without sleep. I needed a strong drink!


So, I prepared some 'Picholine shoots' (olive oil from the Picholine cultivar) which I helped to make just prior to my 'educational trip' (I have to justify having fun) at what many people might call "tea". 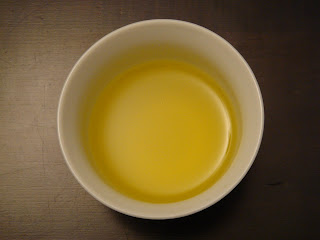 
Looking at my olive oil collection - which will increase considerably within the next two weeks - I was considering some much stronger stuff such as the "Barnea" or the "Barnea Nevali". However, I decided against any further drink as I was in a Picholine mood.

I woke up with a hint of the taste (and I bet none of the nice smell of it) in my mouth.

Talking about olives and drinks.... . There are many stories as to who invented the "Martini". Some credit it to a Californian bar tender who in 1870 mixed some gin with an aromitized white wine and plopped an olive. The bar where it happened was named "Martinez".

Regardless of who invented it, in 1943 F.D. Roosevelt prepared Winston Churchill and Stalin some "dirty martini" (recipe: 2 part gin 1 part 'dry' vermouth and olive brine).


It is told that Stalin's foreigner minister Mr Moltov was not impressed and decided to pursue his own ambitions for a world famous cocktail...the rest is history.

Is this a cup of Gao Shan Oolong or really a cup of olive oil? They look quite similar!
I've been able to drink olive oil by the (soup) spoon, but a whole cup (or is it a small tea cup?) seems more than I can stand.

Well, I guess you were really thirsty for a homely food. A good stinky Munster cheese usually does it for me in Alsace!!

Hey Stephane
You have sharp eyes :)
Its only a little tea cup though.

I find olive oil as a really nice drink all by it self. Usually drink about 30ml every morning (Ok I admit night too).