All tea lovers have what they call "Precious". A unique tea pot they prefer to use for the best (suitable) teas. A tea pot to take out on special occasions. It so happens that some of them own a "precious" pot made from actual precious metal ;-)

A major reason for my slight extended stay in Taiwan is indeed one of those "Precious".

The tea accessories exhibition was mainly the tea artifacts of the renown potter: Mr. Fu.

I have said a lot, but not enough about how friendly the Taiwanese are to foreigners.
Having expressed my astonishment at some of the work presented, the organisers of the competition and exhibition called Mr. Fu who lives some one and half hours away to meet me. I begged them not to do it but this just seem to make them more determined to get him there to meet me - I am wondering what was he must have been thinking when he received the phone call... .

I started running scenarios in my head as to what our conversation would be like. "Great work Mr. Fu", "Where do you get your ideas from...", "Nice pot", "Is this for tea?", "Why did you come here?" As you can see the questions became worse and worse as I run more and more scenarios in my mind.

Some 4 hours! later Mr. Fu arrived (did they wake him up?). My first question to him was "So, what do you think of the weather?". Well, it was not that, but after some 1 hour of great conversation during which we were offered endless amount of local teas we came down to business.

"How much for a unique tea pot?"

After a short negotiations carried out by his friends! who I had great time with in the previous hours and seemed to be more my friends then his, we agreed on what some would call "Cost price".

The problem it seemed was not money but time. It would take some 2-3 months to make the tea pot (he is a busy guy, and the nature of the process also means that some or all pots will break and one will need to re-do make them).

I did ask him for a couple of specifications though.
1) I wanted a large enough pot for many people, yet not too large - it was a slight mistake.
2) A frog inside - I have seen a pot he made with a frog and liked it - a slight mistake too, it is more difficult to clean.

A few months later I received the pot. 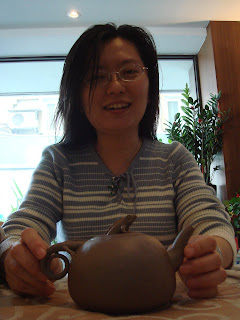 (The handing over ceremony by Vivian, a mutual friend of mine and Mr. Fu.) 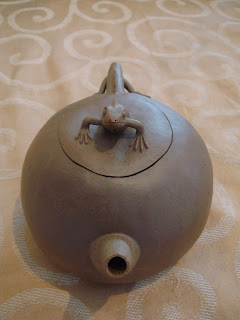 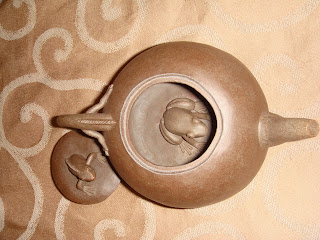 The only thing left now is make enough friends to drink from this huge tea pot.
Anyone for tea?

It is indeed unique! Thanks for sharing. My special pot has a small rooster (my daughter's chinese zodiac) as the lid's knob. It is also quite big (600ml?)...but not as big as yours, it seems from the picture.

That's quite a "precious." Just how many ml does it hold? Have you the opportunity to use it yet? Are you dedicating it to a single variety?

Dear Davelcorp,
It holds about 400ml. I tend to use it when there is a LARGE group of friends or when I want to drink in a some what larger cups.
Hence, it is not often that I use it.
And in a way it has only been used for a single variety - namely - "the one I have most of when ever I wish to use it" :)
The frog inside eats a huge amount of tea.. .