On a recent interview I had with Popeye I asked him.
Ido: “Are you a sailor?"
Popeye: "Ja think I'm a cowboy?" 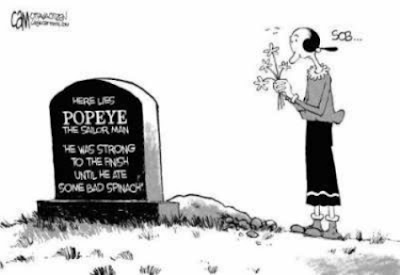 (Pipes and Spinach, a Balanced Diet?)

Not many people know that Elzie Segar the creator of Popeye did not even intend to add him in the original cartoon (mistake baby?).
Ever since the first episode I saw, Popeye was my favorite cartoon character. He is what he is or in his own language "I yam what I yam" and he is the best!
A good hearted, short fused (though considering what Bluto did to him he is a Saint), tattooed, always sharp and funny sailor. Popeye, I miss you (don't worry he is not really dead).

For some reasons, Olive Oyl, Popeye’s love is one of T.V most boring characters.
Her personality is as thin as her body. She flirts with his sworn enemies, and is convinced that she is something special. There is nothing to her that I like, and in many respect she is the opposite of Popeye (and me ;-).

At the risk of destroying a lovely childhood memory, you might want to check out a recent "Something Positive" comic by RK Milholland.
http://www.somethingpositive.net/sp05112007.shtml