It was on my last day in China, I entered a Pu-erh shop on Malian Dao, one among the many I entered and passed by. Due to my lack of Chinese, and their English, I did not have any decent conversation that day and after the long hours the day started to kind of “grow on me”.

I opened the door, had a quick look around and sat by the brewing table. “This is it” I was thinking to myself “I am not going to leave until they chuck me out of here”, my legs hurt and I felt dizzy. My stomach was roaring.

Little did I realize but I sat next to a South Korean Antiques dealer.
We quickly found our selves discussing all sorts of things not least fake antique tea utensils. He pulled out of his little suitcase some replicas from the Ming and Qing dynasties. Some replicas were better then others. He gave me a crush course in how to spot the “tell-tell” signs. I gave him a crush course at what was interestingly my favorite topic at the time, how I was continuously tricked by tea vendors (I learned most from those tricks).
Noting of which he did not experience before. In fact I felt I still had a lot more to “learn”.

We continued our conversation over a multiple of issues. We were not told to leave the place, but after a while we kind of got the hint. So we departed with each other’s email.

I wrote to him once I arrived back to Israel, and sent him some bottles of olive oil.

In return he sent me two “samples” (is almost 100g still called a sample?) of “Mulberry leaves tea” and “Korean Pu-erh”.

It was not until today that I actually drunk the Korean Puerh (I still have to taste the Mulberry Leaves “Tea”).

Before I opened the “sample” I was kind of joking how funny (well, it is not really funny) it would be if this happens to be the best Pu-erh I ever tasted. I could picture the blog’s post title: “The Best Pu-erh – Don’t Come from China”, “China attacks South Korea …”.

Little did I know but my third thought after the initial sip was “this is a self fulfilling ‘prophecy’”.
Although I usually like to mumble a lot and prolong suspense where there is none to be found, I think it is quite safe to say that I can not remember tasting any beverage as tasteful and exciting as that one - at least in the past 5 years.

As one or two of you might know tea is not my favorite beverage, however, after this tea, it might just become.
I truly can’t remember ever getting so excited about a freaking drink. Of the record, I think this is a potential dangerous character development.

Anyways, I have repeatedly said that I am not inclined to publish tasting notes not least because of my poor writing skills. Writing about this tea will do it too much injustice.

I mean what can I write? That the scent of this tea is so good that Jean-Baptiste Grenouille murdered for less.
As I write about this scent there is still a hint of the dominant pine wood smell still lingering in the nose (illusion?) and tongue, damn that's a great taste/scent.

It was 36C indoor when I drunk this tea earlier on today. However, I could not stop drinking this hot Gnostic beverage. It even cooled me down on this hot day.
In the beginning I felt like an explorer wanting to find what I can get out of this tea, soon enough I wondered how this tea will affect me, what will be the next sip like, will it still have the same hair raising effect, will I like it as much now as when I “finish” drinking this tea? I wanted to be an explorer but I ended up being taken for an adventure.

Sip after sip, sniff after sniff, I kept fighting to distinguish all the different scents, tastes and secrets this tea treasured, there were so many smells and tastes which I could not name but which were so comfortable and soothing.

I kept smelling apricots, musky, all sorts of honeys to say the least, but most of all there was this dominant Pine wood scent.

Each taste (I could swear there was honey in there) fought for its 10,000 taste buds of fame. If only life could be as sweet as this tea. Just the thought gets my saliva running again. In fact there were times when I kind of felt like a Dog Bordeaux. Indecently, Bordeaux is the color of this liquid.

Drinking this tea I was intrigued as to its origin. So I got in touch - while drinking - with the guy that provided me with this gift.

Usually I don’t care for the stories behind the teas as I know perfectly well that they are most likely to be just that – “stories”. But this was a tea that deserved a good story.

I have edited some of the email he sent me.

“The tea has been made by the elder sister of my friend’s daughter's master. She is a Buddhist nun, and has been living in remote forest alone, growing tea trees and doing meditations.”
…..
Apparently, the tea maker, a Buddhist nun, is a disciple of previous tea master who handed the technique of tea making to her. The technique of tea making has been initiated into their disciple, because in basic it is the tradition of Buddhist temple inside. The tea in general was sold out in the circle of Buddhist temple, because quantity is not enough to supply to outside market, and they are not a kind of merchant. Even in Korea, only a few of people know of the tea, because of the reason I told above. In fortune, I got know the tea because my daughter is the disciple of younger sister of the tea maker.

Oh, you asked the reason why the person grows or makes the tea? The reason is that the tea maker live alone in forest, and in oriental Buddhist tradition, some of Buddhist priests live in self-sufficiency. So tea making can be said a kind of living means and practice of Buddhism.

The tea trees have grown in about 250m above sea level, southen part of Korean peninsula. The field of tea trees is surrounded by mountain peaks, about 300~400m high above sea level. The forest consists of many kinds of trees, but mostly pine trees. So you can smell and taste the perfume of pine tree, because spring time the pollens of pine trees spread all over the moutains, penentrating into the warehouse where the tea leaves have kept.

If you have any chance to come to Korea, I will take you the place of tea field. The warehouse is just downside of the house in forest where the Buddhist nun lives.

I heard that the tea was a littel over 10 years old about 2~3 years ago. So in present, it should be about at least 13 yeasr old.”
Source: "Inbox"

Well it is not exactly the most romantic or for that matter dramatic “tea story” you might have come across (neither is it really a 'story' as such), but it is real and I have kindly asked him to book a place for me in the warehouse.
This is an extra virgin pu-erh tea - a tea without any defects.
I will post pictures of the wet leaves tomorrow when I finish drinking - see end of post for those pictures. 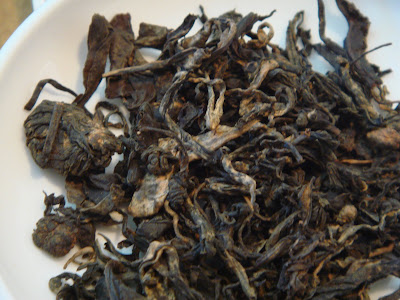 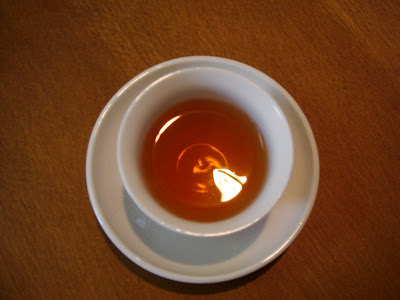 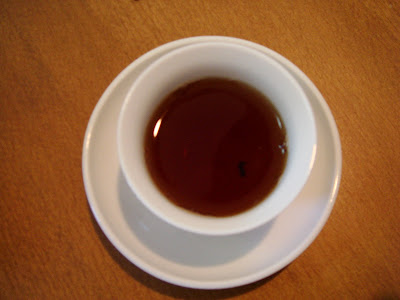 (A later brew for a much longer time) 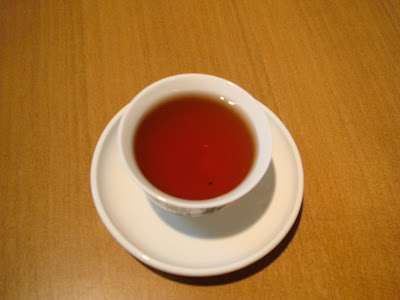 (Over night brew - still, a perfect cup of tea)
I wish 99% of all teas could taste as good as this overnight brewing tea. 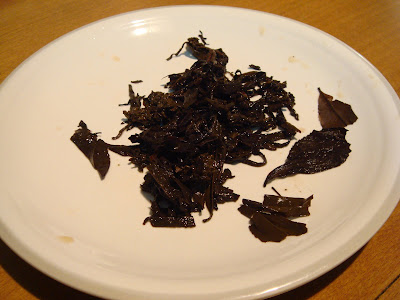 its a damn good thing you got 100 grams. Now you could send it to your friends....

Hrmph, you would have to find something so good that is completely inaccessible to the rest of us!