The 8th Wonder of The World - Hummus

Every country has some sort of an institution or monument it is proud of and resembles a great aspect of what that country stand for. France has the Cordon Bleu, Italy has the Coliseum, Egypt has the Pyramids, Cuba has Castro, Taiwan has the Tea Research and Extension Stations, Afghanistan has Bin Laden, the US of A has the Academy of Motion Picture Arts and Sciences and my hometown Kfar-Saba (Israel) has "The Academy of Hummus". 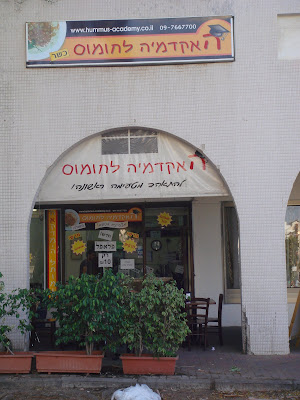 Admittedly, the building is not as glamorous as the Kodak theater, neither has any graduated student appeared on T.V. - yet. But the Hummus is first class and service outstanding. 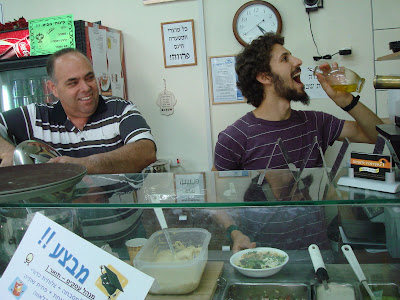 (Picture: On the Left - "Professor Hummus", On the Right - "Nutty Hummus") 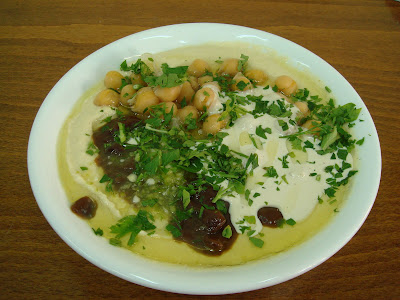 (A Master Thesis on "the effect Ful (Egyptian bean), Tehina, Hummus beans, Olive Oil, Lemon and Garlic sauce - and of course Hummus - on the human palate & bowel")
Professor Hummus also known as Boaz Ygal does not know how to cook very well - so he says. However, he does know one thing very well, the art of hummus - so I say. Family and friends were always eager to visit him and his family and it was not only for their great personality and welcoming face.
His hummus dishes soon became a legend in his home town and its surroundings.
Until about a year and half ago Boaz was a happy networks engineer and part time "hummus entertainer". This sadly changed one day when Boaz was fired.
A Lesson for Life
For six months Boaz worked hard at perfecting his hummus recipes. He searched on the Internet and looked at various cooking books. He had a dream, and he was going to make it reality, a hummus speciality restaurant.
Until this day Boaz says he is continuously learning and adapting his recipes.
Boaz has two secret ingredients. One which he was willing to share with me, the other which you will have to discover for your self.
The great secret of the Hummus Academy is its prodigy Yonni ("Nutty Hummus" pictured above). Yonni, a drummer in a well known hard-rock band called "Melakekei HaPinka" ("The Bowl Lickers") - how fitting - participates in all cooking experiments and plays a vital part in adjusting and fine tuning the recipes.
Hummus (for First Degree Students) - A Must Try!
By: Professor Hummus
Makes about 1 kg of Hummus
Ingredients:
1 kg Hummus (Haddas variety if you can find)
3 Garlic cloves
1 Tsp of Cumin
1.5 Tsp of Salt
100 ml "Divine Tastes" Olive Oil (Yes, the Academy of Hummus uses the exact same olive oil)
150 ml Lemon juice
350g Tehina
Method:
Soak the hummus for 24 hours, changing water every 3-4 hours.
Drain well and wash the hummus.
Put the hummus into a pot.
Add water, enough to cover the hummus twice over (for example, if the hummus fills half a cup then fill water until the cup is full).
Cover the pot and let it cook for about 3 hours. The test to know whether it is ready is to hold a hummus between your fingers. If you can squeeze it easily it is ready.
Take out 500 ml from the liquid inside the pot and store at a safe place, you will need it later.
Drain the rest very well.
Insert all ingredients with the exception of the Tehina and the liquid you put a side before, into a mixer.
According to the texture you add a bit of the liquid (first a bit) only then do you add the Tehina.
Afterwards continue adding according to the texture from the liquid.
Enjoy!

Way to go!
I don't know if you know the Hebrew version of our hummus blog (at humus101.com), but this is exactly the kind of stuff we post there, and this one is new to us, I must admit.
Thanks for the recommendation!

Thanks for the recipe! I'll have to make some with the falafels before I've finished your divine olive oil!

In the meantime, it's nice to back in Taiwan and see how worried you were for me!

Regarding the hummus recipe: may I humbly suggest, while the list of ingredients is correct, the ratio is suspect, i.e., the garbanzo bean amount is too high times two. Must be a typing or translation error. This recipe will make a very bland dip.