A Lap Dance and a Refreshing Cool Idea

I am not sure what was there first, the diamond exchange, the fancy hotels, the bars, the bankers, the insurers, the giant real estate companies, the luxury offices, the fancy restaurants, the night clubs, the strip clubs or the hooker?

But somehow Ramat-Gan has it all in what is now a very flourishing financial district that claims to offer both business and pleasure.

It was during my lunch break that a colleague and I decided to have some ice tea in a nearby place. We strolled about a minute further than usual and ended up sitting in a coffee house just in front of a strip club.

You can imagine what were the first, second and third conscious thoughts we both had while sipping through the ice tea.

The First Conscious Thought While Drinking the Tea – a memory
Location: “Legs Eleven”, Birmingham, England.
When: Some 10 years ago
Reason: Celebrating some accomplishment during the first degree.

After just about everyone in the group had a lap dance or four, I was the only one who missed out on the "fun".

“Nice name” (was it your biological –sugar- daddy who named you?)

We had a silly conversation which included me asking her questions like “why are you doing this?” To which she had an equally silly response “I love it, its great fun. You get to meet so many people. Its exciting …”.

Some two minutes later she suggested a dance.
She looked me right in the eyes…. .

It was then that it occurred to me that I am not sure how I am supposed to behave like.

Do I act like I am used to beautiful girls dancing naked around me? In which case how does someone like “that” behave?
-She took off her bra-
Damn this is against most religions!

Do I nod in approval?

Do I tap with my feet to the music’s beat?

The last thing I want is to dribble.

Anyhow, I did the most natural thing that any person facing a similar situation would do – I started to laugh really hard for no apparent reason.

She looked at me with those amazing – by now angry - eyes of hers and said
“What are you laughing at?”
“Oh sorry, please don’t take it personal, haha HA H A H A H A”

“If you don’t stop laughing, I will stop dancing!”

At which point my friends for the first time since she approached our table gazed at me rather than her.
They were sitting on top of the palms of their hands and I was not sure whether it was to hold them from jumping at her or from strangling me.

Needless to say I went mute.

Oy vey, I was pissing off everyone. This was turning into an angry and dangerous lap dance.

I started to pray, not so much for my sins as for the song to finish.

But it just kept going on and on. So, I quickly apologized to her saying that it was the first time I find my self in such a situation and that she is “very beautiful … talented … and fun around with”.
She smiled.

We must have bonded on some platonic level, because when the song finished she kissed me on the cheek.

I think she fancied me, why else would she do all that for?

Do you want to have something that is both refreshing and looks great on a very hot summer?

Here is a suggestion: 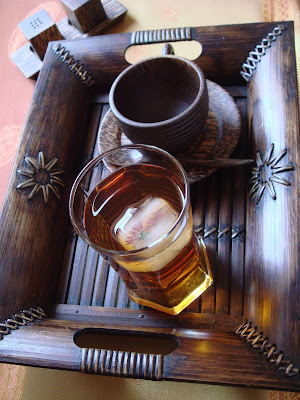 Fill the ice cube tray half to the top.
Insert the flowers you wish to have inside. 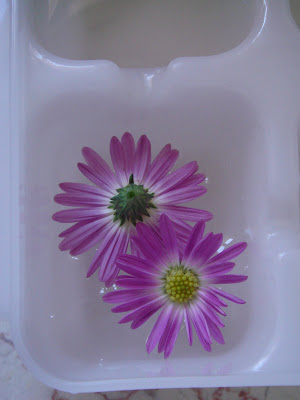 Put in the freezer for 3 hours.
Take out the ice cube tray.
Fill with water to the top.
Freeze. 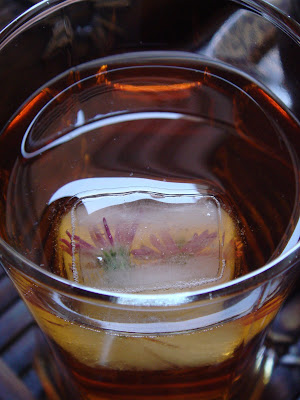 A great way to enrich your Ice Tea drinking experience.

Oh man, Ido! That was a calorie-burning laugh you gave me! Excellent. The internal monologue was just brilliant.

And the flower ice? (A subtle nod to the stripper?) Pretty neat as well. I'd never thought to do this before, but the next time I get it in my head to try something special I certainly will.