Despite the falling markets and the impossible amount of stress these caused. Last week was one of our best. It was not the fact that we lost less money than most competitors (who wants to lose after all) as much as we gained new clients.

With the death of Mrs. Rubenstein rumors have began to spin that her actual wealth was much higher then previously believed.

So, from around Monday to Thursday, the office felt like a geriatric department. One by one, and as if by magic Mrs. Rubenstein friends (her extended Bridge club?) appeared in the office never crossing each other’s path (do they know each other’s timing?).

They all insisted to speak to - you guessed it – me.

Did Mrs. Rubenstein speak about me with her friends? What did she say?
I was intrigued.
There were so many things I wanted to find out. There I was thinking to myself how I could outsmart them into telling me what I want without even them knowing it.
I quickly gave up. These elder women could smell what I was after before I was even thinking it.

Momentary “Power”
At the competitive market we live in one rarely enjoys the “power” that I felt talking to these women. They thought they could “Rubenstein” me with endless conditions. But I knew better, they would follow their leader to the end. I stood for their leader’s security, comfort, crown and apparently quite a few gossip stories too.

Nobody is going to “Rubenstein” me anymore. At least not as long as have enough money for bread, olive oil and tea.

I accepted them and would help to supervise their account, but under one condition. I am not to be their contact. If they wish to speak to anyone then there is Yaron.

The funny thing is, Yaron does not know it yet.

Less Then Meets the Eye 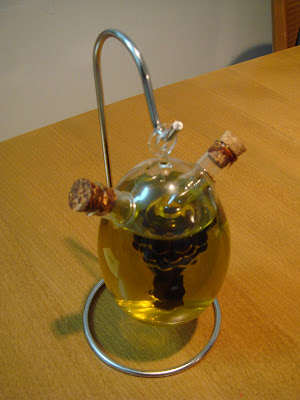 The problem lies with the cork. The cork does a poor job at stopping the liquids from spilling out. This results an oily patch.
Moreover, the mouth of the bottle is badly designed and drips. This results in oily finger print marks on the bottle.

I kind of like Mrs Rubenstein and her friends.