By Josh
Building a truly great sandwich is like building a tall building in that it must be constructed perfectly or else it falls apart. It was just yesterday in fact that I was pondering this very thought as I constructed my rendition of “The Big Sandwich”. There are many different interpretations of this concept, not least of which is a Katz’s Corned Beef Sandwich: 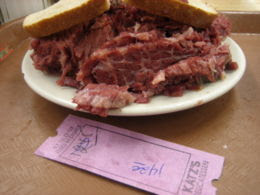 Heaven on a Plate

The first decision for any sandwich is the choice of bread. In my opinion, no bread is better for making a sandwich of this caliber than pita bread. Pita has distinct advantages over most other forms of sandwich bread in that it is very strong and resists going soggy in the presence of liquids. Good pita bread will also not break under pressure which is very important, given that inevitably a big sandwich requires a firm grip to hold it together. 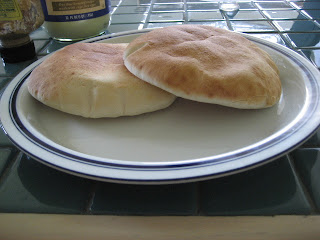 The perfect pita. Good color, texture and thickness.
Pita keep very well in the freezer thus having a bag on hand is not a bad thing. It’s amazing how a toaster can bring a frozen Pita back to life, nearly replicating that fresh-from-the-oven aroma and taste. Do not settle for generic brand Pitas as these tend to be very thin, flat and taste like cardboard. Frozen pitas also have another great advantage, shown below: 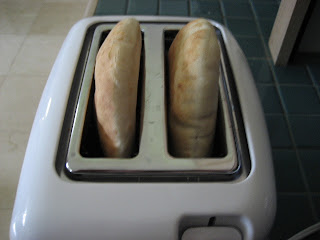 Frozen pitas inevitably contain moisture throughout and when this is heated in a toaster, it is converted into steam which causes the Pita to expand. Expansion may or may not happen and if your Pita suffers from ED (Expansion Dysfunction), you can try giving it a couple of taps on the top of the Pita.

Toasters are incredibly varied so experimentation with your particular toaster is key. As a guide, this particular toaster set to 4 out of 7 gives perfect results. From frozen, we toast through one cycle and then flip the pitas around 180 degrees and toast again.

The next step is to slice the pita. Be very careful at this stage, as super hot steam is contained in the pita’s cavity and could burn if not careful. Now the real construction begins. 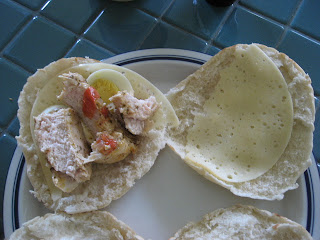 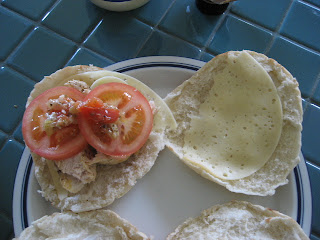 Tomatoes to finish off the first layer 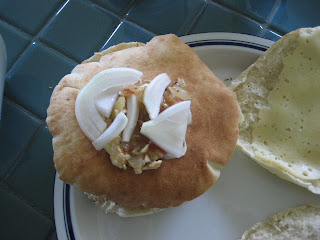 With the first layer closed off, we add some onions, mayonnaise and mustard to start the second layer. 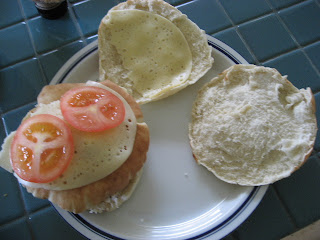 Topped off with some more tomatoes and lacey Swiss cheese completes the second layer. 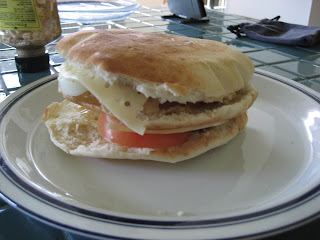 And there you have it! A genuinely big sandwich that eats as good as it looks.