“You are a Vegetarian Ha-Ha!”

Last Thursday I invited two friends, one of which is a childhood friend that never ceased to take the piss out of me for being a vegetarian (you won’t believe how many jokes exist about vegetarians).

When ever I invite someone for dinner I always ask what they don’t eat – for obvious reasons.

My friend (the ‘funny one’) boosted that he eats “everything”.

“Great” I thought. This would be easy.

I was not going to convert him into a vegetarian, so early that morning I went searching for fish. I have never tasted fish in my life never mind cook one. But, for a good friend (he even makes taking the piss out of me entertaining) I would go the extra mile.

After a few giggles here and there we all sat down at the table.

To cut a long - menu - short, this ended up becoming a host's worst night mare.

Mushrooms – “I don’t eat mushrooms, because I don’t like the shape”.

Feta cheese – “I did not have any milk products for two years and it will affect my stomach”. Duh, we had a pizza together a week earlier.
Eggplant – “childhood memory of being forced to eat something with eggplant”.
Him: "Oh, didn't I tell you?"
Me: "No you did not".
Mayonnaise (home made!) - “I don’t eat eggs”. At this point I started to wonder if he turned into a Vegan.

Amongst the other things he would not eat that meal was: Avocado, Okra (lady fingers), Melon and Broccoli (to which I told a “joke” that follows a similar story line to this one:

A young and beautiful woman gets into the elevator, smelling like expensive perfume. She turns to an old woman in the corner and says arrogantly, "Giorgio Beverly Hills, £100 an ounce!"
Another young and beautiful woman gets on the elevator and also smells of very expensive perfume. She arrogantly turns to the old woman and says, "Chanel No. 5, £150 an ounce!"
About three floors later, the old woman has reached her destination and is about to get off the elevator. Before she leaves, looks both beautiful women in the eye, turns and squeezes out a fart......"Broccoli - 49 pence a pound!”.

Nobody laughed, but funny guy decided to take a bite of the broccoli. He liked it.
I regretted I did not have any other silly jokes about “lady fingers” or “Eggs” (eggy farts are the worse).

Anyways, he has not been taking the piss out of me since than. Shame, I was kind of looking forward for it this time.
Main Dish of the Evening:
Spicy Tuna (apparently tastes nice)

Fresh Tuna -rinse the fish and leave in a drainer – you don’t want a watery fish.

Cover the tuna with the sauce on both sides and let it absorb the tastes for about 5 hours in the fridge.

Frying the Tuna – Place the Tuna steaks in a pan with a touch of "Divine Tastes Olive Oil. Cook for about 3-4 minutes. Turn and cook for 3 to 4 minutes longer. You want it to be nicely fried on the outside but still pink in the center.
Tip: Apparently tuna gets very hard if over-cooked so be careful. 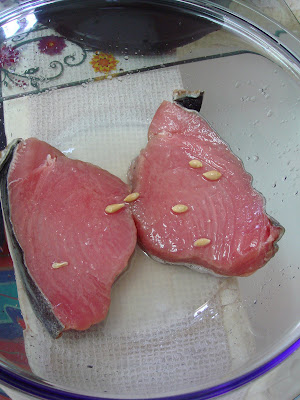 (for some reasons I put the lemon separately) 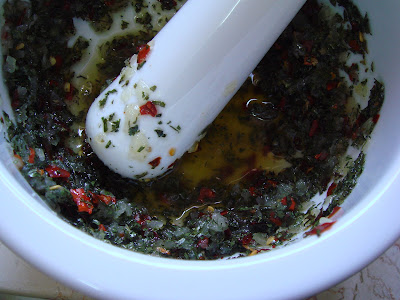 (mixing to make a sauce) 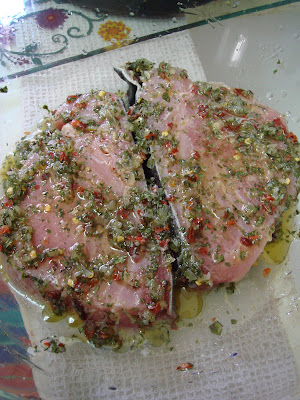 (into the fridge for 5 hours) 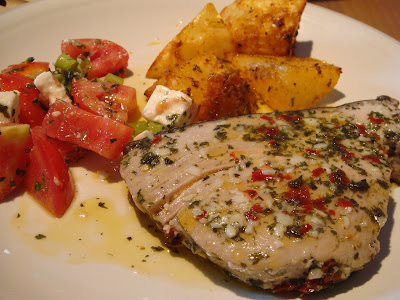 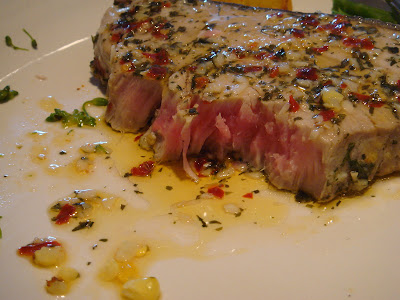 (funny guy's plate with a hint of the broccoli)