Sotheby’s is to unveil what is known as Van Gogh final masterpiece of work – “The Fields” (Wheat fields). The Fields was completed on 10 July 1890, just 19 days before Vincent Van Gogh died.

Since this is also the first time that this Van Gogh is put on public auction, it is expected to become one of the most highly-valued paintings ever auctioned. 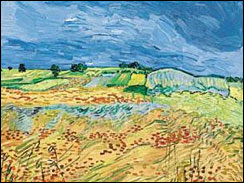 “As a unique work of art from the final days of the artist's life” a spokeswoman for Sotheby’s said “the price will most likely be driven by passion. This is perhaps the last opportunity for a collector to acquire a landscape of this quality by Vincent van Gogh".
("How would you like to pay, Sir?")
In a letter written by Van Gogh to Theo on the 10 July, the artist described having just painted what experts believe to be The Fields, along with two other works.

He wrote: "They are vast fields of wheat under troubled skies, and I did not need to go out of my way to try to express sadness and extreme loneliness. I hope you see them soon – for I hope to bring them to see you in Paris as soon as possible, since I almost think that these canvases will tell you what I cannot say in words, the health and restorative forces that I see in the country".

Arifa Akbar, the art correspondent from “The Independent” quotes Mr Norman the executive vice-president at Sotheby’s saying that The Fields illustrates how Van Gogh was able to separate his deep inner turmoil and stormy emotions from the hope and celebration of life that is instilled in this painting.

"Here is an artist literally on the verge of taking his life and filled with tremendous despondency, yet he is still painting with lemon yellows, azure blues and emerald greens.
"We know this is a man barely holding on to his will to live yet he is able to separate his energy and focus on what he sees before him," he said.

A lot can be learned about Van Gough’s world view from his letters to various people he loved and cared for. Furthermore, we can learn about the beauty of things from his unique understanding and way of looking at things, not least about the olive tree.

The Olive Tree
The following is a letter to J.J. Isacson by Vincent Van Gough (at the time of the letter he was 37 years old).
“ Dear Mr. Isaäcson,

Back in Paris I read the continuation of your articles on impressionism. 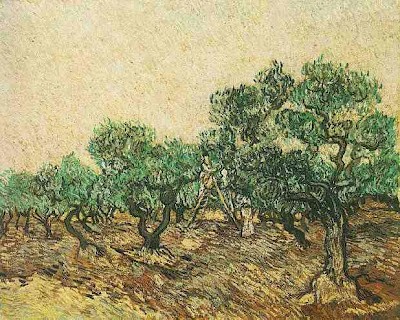 Without wanting to enter into a discussion of the details of the subject that you have attacked, I wish to inform you that it seems to me that you are conscientiously trying to tell our fellow countrymen how things are, basing yourself on facts. As it is possible that in your next article you will put a few words about me, I will repeat my scruples, so that you will not go beyond a few words, because it is absolutely certain that I shall never do important things.

And this, although I believe in the possibility that a later generation will be, and will go on being, concerned with the interesting research on the subject of colours and modern sentiment along the same lines as, and of equal value to, those of Delacroix, of Puvis de Chavannes and that impressionism will be their source, if you like, and future Dutchmen will likewise be engaged in the struggle - all this is within the realm of possibility and certainly your articles have their raison d'étre. 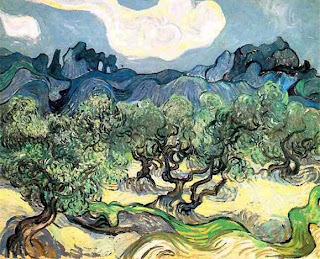 But I was straying into vaguenesses: so here is the reason for this letter - I wanted to let you know that in the South I have been trying to paint some olive groves. You surely know the existing pictures of olive trees. It seems probable to me that there are such in Monet's and Renoir's work. But apart from this, I have not seen anything of the work I suppose to exist - apart from this, not much has been made of olive trees.

Well, probably the day is not far off when they will paint olive trees in all kinds of ways, just as they paint the Dutch willows and pollard willows, just as they have painted the Norman apple tree ever since Daubigny and Cesar de Cock. The effect of daylight, of the sky, makes it possible to extract an infinity of subjects from the olive tree. Now, I on my part sought contrasting effects in the foliage, changing with the hues of the sky. 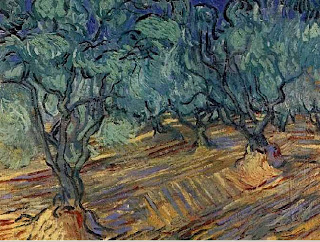 At times the whole is a pure all-pervading blue, namely when the tree bears its pale flowers, and big blue flies, emerald rose beetles and cicadas in great numbers are hovering around it. Then, as the bronzed leaves are getting riper in tone, the sky is brilliant and radiant with green and orange, or, more often even, in autumn, when the leaves acquire something of the violet tinges of the ripe fig, the violet effect will manifest itself vividly through the contrasts, with the large sun taking on a white tint within a halo of clear and pale citron yellow. At times, after a shower, I have also seen the whole sky coloured pink and bright orange, which gave an exquisite value and colouring to the silvery grey-green. And in the midst of that there were women, likewise pink, gathering fruits. 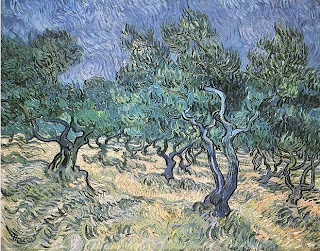 These canvases, together with a number of flower studies, are all that I have done since our last correspondence. These flowers are an avalanche of roses against a green background, and a very big bouquet of irises, violet against a yellow background, against a pink background.
I begin to feel more and more that one may look upon Puvis de Chavannes as having the same importance as Delacroix, at least that he is on a par with the fellows whose style constitutes a “hitherto, but no further,” comforting for evermore. 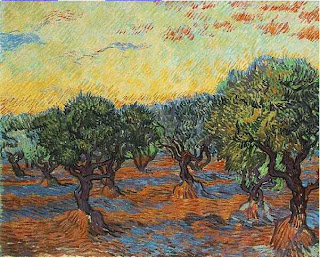 Among other pictures his canvas, now at the Champ de Mars, seems to contain an allusion to an equivalence, a strange and providential meeting of very far-off antiquities and crude modernity. His canvases of the last few years are vaguer, more prophetic if possible than even Delacroix, before them one feels an emotion as if one were present at the continuation of all kinds of things, a benevolent renaissance ordained by fate. But it is better not to pursue the subject when one is standing gratefully enthralled before a finished painting like the “Sermon on the Mount.” Ah, he would know how to do the olive trees of the South, he the seer. As for me, I tell you as a friend, I feel impotent when confronted with such nature, for my Northern brains were oppressed by a nightmare in those peaceful spots, as I felt that one ought to do better things with the foliage. Yet I did not want to leave things alone entirely, without making an effort, but it is restricted to the expression of two things - the cypresses - the olive trees - let others who are better and more powerful than I reveal their symbolic language. 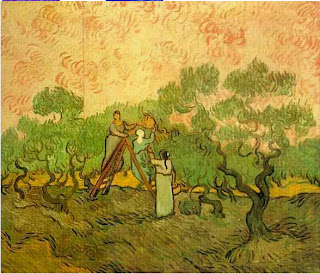 Millet is the voice of the wheat, and Jules Breton too. Therefore I assure you that I cannot think of Puvis de Chavannes without having a presentiment that one day he or someone else will explain the olive trees to us. For myself I can see from afar the possibility of a new art of painting, but it was too much for me, and it is with pleasure that I return to the North.

Look here, there is another question that comes to mind. Who are the human beings that actually live among the olive, the orange, the lemon orchards?
The peasant there is different from the inhabitant of Millet's wide wheat fields. But Millet has reawakened our thoughts so that we can see the dweller in nature. But until now no one has painted the real Southern Frenchman for us. 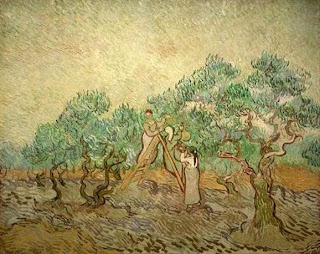 But when Chavannes or someone else shows us that human being, we shall be reminded of those words, ancient but with a blissfully new significance, Blessed are the poor in spirit, blessed are the pure of heart, words that have such a wide purport that we, educated in the old, confused and battered cities of the North, are compelled to stop at a great distance from the threshold of those dwellings. And however deeply convinced we may be of Rembrandt's vision, yet we must ask ourselves:
And did Raphael have this in mind, and Michelangelo, and da Vinci? This I do not know, but I believe that Giotto, who was less of a heathen, felt it more deeply - that great sufferer, who remains as familiar to us as a contemporary.
[The end is missing.]
Vincent van Gogh. Letter to J.J. Isacson. Written 25 May 1890 in Auvers-sur-Oise. Translated by Mrs. Johanna van Gogh-Bonger, edited by Robert Harrison, published in The Complete Letters of Vincent van Gogh, Publisher: Bulfinch, 1991, number . (Source) 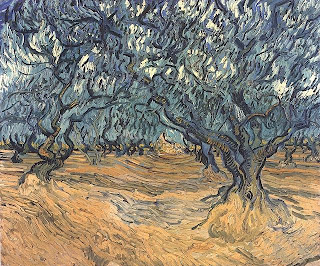