Interview - Part A (The Person) - Shamna

A new olive press machine entered the local (and global, its a prototype) olive oil industry last season. Some of the best olive oil I have ever tasted come from that machine.

So I went to meet the man & the machine behind it.

The Person Behind the "Shamna" Olive Oil

His name is Erez Abramov (age: 41), married, with two children. 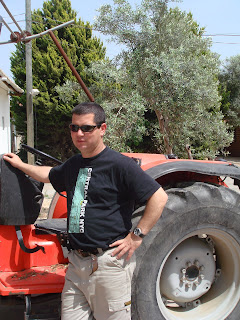 Erez's first memory of himself is of running between olive trees. The love for olives has always run deep through his veins, generation after generation. Not just a family business but a family unifier.

When ever there was a family row they reconciled with Hummus and a generous portion of olive oil on top... .

Erez's mother feed him with olive oil before she gave him milk since it contained all the goodness little Erez needed.

He still remembers playing "hide and seek" with his first and only childhood love in the olive yard.

Erez's first French kiss was with a Picholine olive... .

It is no wonder then that when little Erez grow up he wanted to own his own olive press.

Erez really does like olive oil a lot, but he owns an olive press because it makes money - at least it should theoretically. Cheek in tongue he suggested to me that I can buy olive oil and the olive press.

He never kissed an olive, and he never really played hide and seek with his first and only childhood love in an olive grove but he did marry her!

Ohhh one more thing, his mother never feed him olive oil as a baby - I think not - maybe she should have!

Not exactly a romantic story (between Erez and the olives), but olives do run deep in his family. His father planted olives already decades ago. However it was just recently that the siblings recognized the business potential of it and took it to another level.

Whether one goes into the olive business for financial gains or not, everyone falls in love with the olive, whether they make or lose money.

So who is really the person behind the Israeli olive-oil brand "Shamna" synonyms with the highest quality of olive oil in Israel.

A kind and loving soul. A very smart and funny person. A good father and moral compass to us all (not kidding this time).

Furthermore, he is nothing less then the one of the most creative and brilliant person I ever spoke face to face with. Erez runs various companies all which are leading edge at their fields mainly due to his patents and undeclared patents (patents you don't want to declare for various reasons i.e. the famous cola recipe).

His companies vary from the most efficient and best hen house disinfection technology to unmanned military cars.

Excuse me if I am going to get a bit carried away here with the guy but he is also a living legend at the local 4x4 racing. He holds for seven years in a row the title "Champion of the Champions", a title given to the best driver of all categories of 4x4.
Apart from it he is a vivid collector of antique Mercedes Benz cars (I have a fetish for MB).

Still, this pales in comparison to Erez's ability to build the best buggies from scratch. The crown of his latest work being the "Erez Raider". A buggy built to win the famous Dakar race. Erez's buggies have made it to numerous front pages of car magazines and calendars and international exhibitions. Various sponsors and magazines even published calenders featuring his cars. Did I already mention he is brilliant? 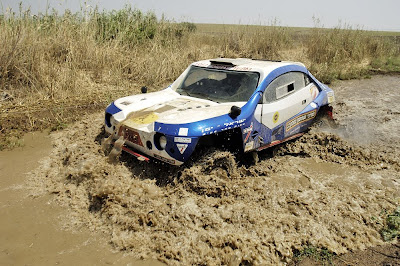 His knowledge on olive oil and everything that it takes to make the best olive oil is overwhelming.

In part B you can read amongst other things about:

The secretes behind "Shamna" tasty olive oils?
The technology behind the "Shamna" olive oil.
Why prototypes can be such pain in the....