The Roman Empire is credited with building a great civilization renowned for its artistic and technological achievements.
At the peak of its power nearly 2000 years ago, Rome controlled the entire Mediterranean Sea area. The industrialization of glass production is considered one of its most significant technological accomplishments.

The Romans have not invented the glass. Long before them the Greek had glass. The Egyptians had it even earlier. However during the 1st century AD things were to change - indeed they would change very rapidly.

With the expansion of the Roman Empire - the Romans acquired skilful people, knowledge and new resources. During this time, Israel became a major glass-making center. It was an industrial revolution and glass, once a rarity found only in the homes of royalty and the very wealthy, became commonly used. This led to the invention of glass-blowing which in turn led to an enormous increase in the range of shapes and designs that glass workers could produce.

Roman glass techniques developed and allowed basically everyone (almost) to own some - glass. In fact by the mid-1st century AD this technology meant that glass vessels had moved from a valuable, high-status commodity such vessels, mosaic tiles and decorative window glass to a material commonly available: “a [glass] drinking cup could be bought for a copper coin” (Strabo, Geographica XVI.2). The technology behind glass required many advancements into other technologies most obvious of course - the furnace.

At the height of its popularity Rome, glass was present in nearly every aspect of daily life—from a lady's morning toilette to a merchant's afternoon business dealings to the evening cena, or dinner.
Small glass bottles and boxes held the various oils, perfumes, and cosmetics used by nearly every member of Roman society. Pyxides often contained jewelry with glass elements. Eventually, merchants and traders routinely packed, shipped, and sold all manner of foodstuffs and other goods across the Mediterranean in glass bottles and jars of all shapes and sizes, supplying Rome with a great variety of exotic materials from far-off parts of the empire. Many more uses were to follow.

Similarly to today, glass was used at all stages in the preparation and consumption of food.

Although the very rich would eat from gold and silver plates (much later they would begin to eat from ceramics), many more used glass vessels for serving food, for drinking, and for washing hands between courses.

Indeed, Propertius ( Latin elegiac poet of the Augustan age around 15BC) reported that glass services were used instead of metal ones for drinking or dining in summer, and Seneca (died ca. A.D. 65) maintained that fruit appears more beautiful when it is in a glass vessel.
At his absurdly lavish dinner party, Trimalchio (Trimalchio is a character in the 1st century AD Roman work of fiction Satyricon by Petronius. He plays a part only in the section titled "Cena Trimalchionis" (The Banquet of Trimalchio). Trimalchio is a freedman who through hard work and perseverance has attained power and wealth) served rare, vintage wines in glass amphorae. Meanwhile, in the kitchen, various foods and condiments, such as garum, a popular fish sauce, were stored in glass bottles and jars.

In his treatise on agriculture, Columella (4 – c. 70 AD) - the most important writer on agriculture of the Roman empire - recommended using glass jars for preserving pickles. The jars should have vertical sides, he wrote, so that the contents can be compressed. Glass containers not only preserved the flavour, but also had the advantage (in a society with a high level of illiteracy) of allowing one to see the contents without removing the cover.

Nowadays, when we speak of Roman glass jewelry - we do not mean that the jewelry is from Roman times, but that it contains Roman glass shards in it.
Authentic Roman glass jewelry is made with genuine pieces of 2,000 year old Roman Glass fragments which have been crafted into beautiful and timeless pieces of jewellery. The glass used in these jewelry was discovered in archeological excavation sites in Israel and other Mediterranean countries. The sources of the glass in a piece of Roman Glass jewellery originally belonged to a vase, jug or vessel.

The presence of sandy dunes and beaches made ancient Israel one of the largest glass producers of the Roman Empire. These archeological treasures rich with Roman glass shards, hidden from the eyes were in contact only with the soil that reacts with the glass. After centuries of contact with the soil the glass shards gave the glass a unique iridescent patina radiant with unseen before beauty, perfect for jewelry. Aged beautifully, the pieces and shards of Roman glass, the many different hues and shades of it; the gorgeous patina glass pair and compliment with gold and silver to form stunning fashion jewelry. Whether you are looking to shop for pendants, earrings, necklace or rings the genuine ancient iridescent Roman glass will beautify any clothing.

Roman glass is a beautiful mélange of shimmering colors and dates back 2,000 years. Each Roman glass jewelry piece has its own unique character and color. These ancient glass pieces may shimmers with iridescent waves of pink, yellow, green, purple and orange to mentioned just a few, making Roman glass jewelry lovely and one of a kind. 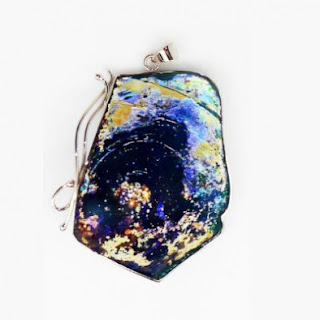 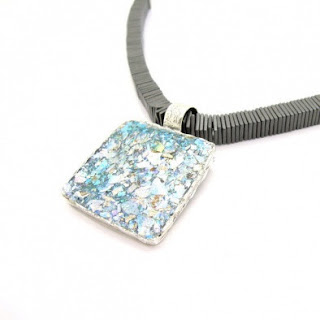